So, it’s been a few weeks since the final chapter of When the Skies Fell was posted.  I promised a little bit of insight into my inspirations and reasoning for the story, and decided to do it here rather than clog up the forums.

When the Skies Fell was inspired, in part, by an amazing picture.

I haven’t gotten around to reading Lady Owl’s “Everything Under the Stars” story, but I do know that there is an alien named Neelix involved.  And no, not THAT Neelix.  But it was a random deviantArt search looking for new aliens to try and emulate using the Star Trek Online character creator that let me stumble on this picture.  I very quickly fell in love with the design, and decided I wanted to use it.

Now, at this point, I was looking for aliens to include in a FAR future story of Rafale, post-Undisputed Border and post-Strength (the next two stories in the series).  WTSF was nowhere in my series “bible.”

I honestly can’t say I remember when I woke up deciding to destroy a planet.  But I do know I began RPing it out.

Now, a quick pause.  RP is short for “Role-Play,” a term I have become very intimate with since I’ve started playing MMORPGs (like Star Trek Online).  But even before I dove into the worlds of video games, I RPed my stories out in my head.  Every action, every character, every opening credits…this was, for years, how I imagined my Star Trek stories.  And it wasn’t just Star Trek.  Anything that interested me I would do this.  I still do it.

So, I began imagining the Rafale responsible for the destruction of a planet by an asteroid/comet.  It had always been that way.  It wasn’t because of the ship crashing, or shooting the planet.  It wasn’t some other alien influence.

The “Armageddon”/”Deep Impact” angle came when I decided that, in trying to stop the asteroid, Rafale would first be unable to do anything, and then second would be trapped and equally doomed.  I removed the first part of Rafale trying to destroy the comet for timing issues; looking back, I wish I had left it in.  Hindsight and all that…

But I needed a catalyst, something that would ensure a) the planet died, and b) the ship survived.

After the events of Multiverse 2, and the resounding disdain for the character over the previous year, I had my scapegoat.  Someone I was desperate to kill off because I, too, was beginning to hate even showing him. 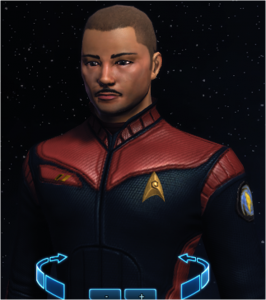 Seymour Sonia.  Creepy ‘stache and all.

I was going to kill Seymour.  He was going to fail, be the reason for the deaths of billions, and get himself killed as well.  It would be glorious.

And then I realized…he’d die trying to save people.  He’d have a noble sacrifice.

I couldn’t do that for him.

Sonia’s actions, and his insubordination, wind up destroying the planet.  But he doesn’t get the glory.  He doesn’t get off easily, not having to pay for his actions.  Sonia lives.

And then, in one final twist of the dagger for anyone rooting for him to finally get what’s coming to him…I give him one final out.  Which he takes.

He lives to see the consequences of his actions…only to run away from them again in a final, cowardly act of desperation.  Because it would have been too easy to just kill the bastard.  Besides, now I can use him as a potential foil for Jessica and the Rafale, and for TPhoenix’s T’Randa Rembrant and Independence.

All that was left now was to find the perfect race to destroy.  A young-to-the-galaxy, taking its first small steps in warp travel, desperate to survive.

I decided on the beautiful Ala as the starting point, and went from there.  Sad to do it, but so much more infuriating when it all falls apart and her people die.  I had to do it.

WTSF came out of nowhere; there is a mission that comes close in the game Star Trek Online, in that there is a comet threatening a planet, but that’s the end of the similarity.  WTSF was the second story separated from actual, in-game missions (the first being Fix You, although that was based on previous RP between myself and Justine’s player, while WTSF was all original) and came to fruition from concept to publishing in under a year – the first time I did that was the first story I ever posted on Ad Astra, After Darkness (since renamed “Darkness Dawns”, to deconflict from the “Into Darkness” movie and “After Darkness” comics, both completely unrelated and completely AFTER I chose my title, but whatever…).  While there are still some things I wish I had done differently and left in from the original concept, I’m pretty pleased with this foray and I can’t wait till after Undisputed Border and Strength when I go away from game missions again.

Any other questions about the story?  Hit me up with questions here or on the forums!

This is mostly just an update to say that life has been throwing a lot of…strikes…at me the past few weeks.  I’m in training for a different job, and I hit a bit of a snag the last month or so.  BUT!  My training went really well yesterday, so I’m back on track to do a final evaluation next week, and I’ll be good to go.

Needless to say, writing in general hasn’t exactly been high on my priority list, nor has coming up with something to write for here.  I expect to get back hard in the swing of things once my training is complete though.

I’ve started on the fourth story for Rafale, titled “infilTRAITOR.”  I know, I know…it’s misspelled.  I know, I know…you know it was on purpose.  This is probably the last of the stories I do that pulls from the game somewhat directly, though this one is heavily modified from the original mission (as opposed to “Ghost Ship,” which pulls heavily from the in-game mission).  I’m looking forward to “infilTRAITOR” because I’ll be introducing a character played by a very good friend of mine and basically kick-starting his own story lines (assuming he continues to be excited about writing, lol).  We’ll see how it all goes, but I know it’s going to be a fun story to write for me.

Also started is my submission for the monthly challenge.  I’m not going to go into too much detail, but it will be filling in a bit of the gap between “Ghost Ship” and “infilTRAITOR.”  I’m still a bit iffy on the delivery of it, but I think it’ll be a nice contender in the mix.

Beyond this, I’m not really sure what else to write for you guys.  If you have any questions you want me to answer here, or any information you’d like me to share (about characters or stories or whatever), leave a comment below and I’ll get to it!  Have a nice day!

Well hi!  I’m TemplarSora.  It’s not my real name, obviously, just the pen name I write under.  Actually, it’s my handle for a LOT of things nowadays.  If you go to another website or play a video game somewhere and see a TemplarSora, it’s me.

I figured most of the community that produces a lot of product for Ad Astra has these blogs.  I’ve read a couple, and it certainly seems like a neat way to talk about what you’re doing in your fiction, explaining your characters, letting people know you’re still alive and kicking.  So, I decided to join the party.  Granted, I’m pretty late to the party.  I hope the drinks haven’t run dry yet.

I’m also a somewhat latecomer to the community in general.  I joined up September 2011, where I produced a piece of fan fiction titled “After Darkness – USS WHISTON,” which followed a Starfleet crew in the alternate universe created for Star Trek (2009).  While it didn’t win that month’s writing challenge, it was a fun thing to do.  Up until that point, the longest “fan fiction” I had written had been in the form of forum posts for roleplay groups I was part of in City of Heroes (RIP) and Star Trek Online.  I had certainly always had ideas floating in my head for my own Star Trek “series” of sorts, that changed as I grew older, but until this point I had never actually written anything down.

My wife got me interested in the idea to at least go searching for Star Trek fan fiction.  She was part of a Twilight fan fiction community, and had even taken a stab at writing her own fanfic.  She enjoyed it, and still does.  She fancies herself an editor; she’s still editing for one of her twi-sisters who is writing a very long fan fic with no end in sight, but I digress.  My initial google search yielded Ad Astra near the top of the list and…the rest is history.  I decided I could write my own story, and did so.  Another challenge popped up, and I produced “Interlude – Silence,” which was my first longer-length story featuring my Star Trek Online characters.

My count is now at seven stories, with one monthly challenge win.  Two series – Rafale and After Darkness – with a third very well in the works.  And for Rafale, well…Star Trek Online is a vast universe in itself to write in.  I have two stories (beyond the three interludes pieces that I’ve done) in the Rafale series, and I’ve sent my third to the editor (read: loving, amazing, wonderful wife person) and started working on another interlude for this month’s challenge, while also starting on the fourth story in the series.  And let me put this into perspective…this is story four out of a planned twelve stories for the Rafale and her crew.  And while these first four (and even the fifth) stories pull heavily from the game itself, I’m doing my best to make them easy to understand and follow.  You won’t need to have played the game to completely understand what is going on.  But in story five and beyond…expect a large departure from the game storylines.  Along with that, I’ve been encouraging a friend of mine who goes by the handle ThunderPhoenix to write as well; when he gets going, expect some nice crossover work as we expand the same universe.

I’ll leave you with those little teasers for now.  I’ll update in a few days with a progress report, and hopefully we’ll make this at least a monthly, if not weekly, update.